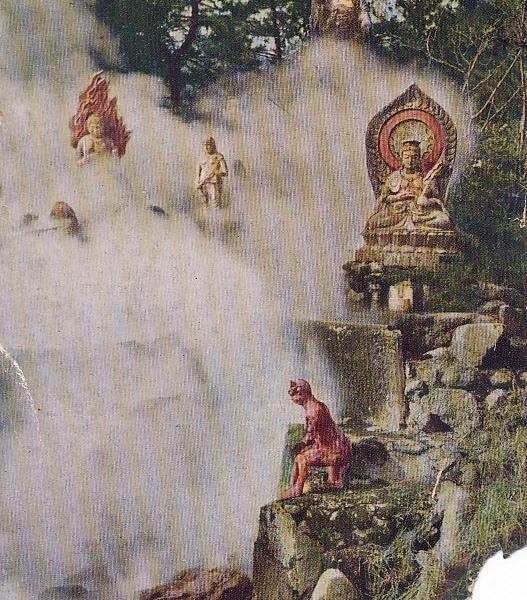 I found an old postcard.  I was clearing out “stuff” in an attic.

My father passed just a week ago after slowly disintegrating from Alzheimer’s for the last 10 years.  I heard the news and flew home for his funeral.

The last time I saw him, about 9 months ago, he didn’t recognize me.  He haven’t recognized me for a long time.  I spent much more time talking with him once I became a nice stranger to him.  When he knew me, we didn’t talk to each other.   He talked at me.  I talked to myself.  We didn’t communicate.

My mother seemed to be relieved.  “I’ll burn all the photos of him,” she said.  After his funeral, she immediately started to clearing out “stuff.”  She has been clearing out “stuff” since my father moved to a nursing home 4 years ago.  My father hoarded.

I was helping her.  And I found the postcard along with yellowed newspaper clippings.  It was from my parents to my grandmother on their honeymoon.  It was from them before I ever be conceived or maybe on the day I was conceived.

They were somebody I didn’t know.   I smelled happiness from the message on the postcard.  It was an ordinary message.  “We are having a good time.  We bought something for you and sent it by mail…”  What did they buy?  Who chose the postcard?    Why is it here?  The old house my grandmother used to live in was demolished decades ago.  Did my father saved it when my grandmother died?    What happened to this newlywed couple?

I never saw them happy together.  I don’t know them.

I showed my mother the old newspaper clippings I found.  One of them had a group photo of nurses. I recognized my mother among the young nurses.  She said, “That’s me,” and she threw them in a trash bin.

I didn’t show her the postcard and I brought it back to my place with me.

The irony?  I also fond photos I sent to my parents long time ago, while I was married.  I looked young, beautiful and happy with the guy I was married to.   Who is this woman?  I don’t know her either.