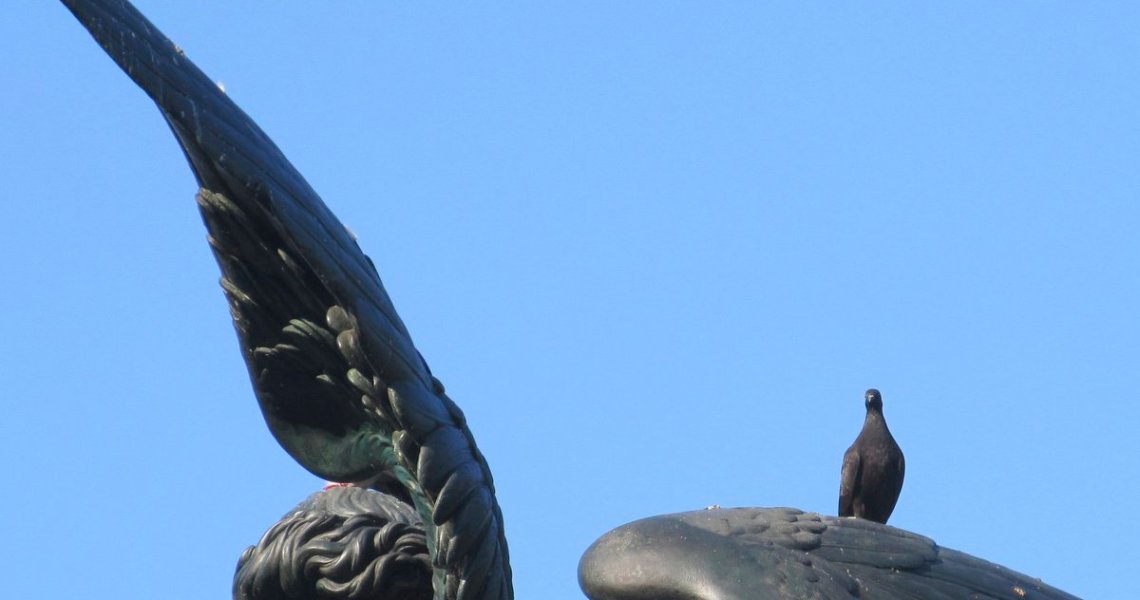 What’s wrong with the girl who kicked at a pigeon?

A group of teenage girls were walking down the street.  It was an early afternoon in the late spring.  A couple of city pigeons were picking up pizza crust scraps on the sidewalk in front of a neighborhood pizza place.   An ordinary pleasant day in a relatively quiet street in Upper East Side.

As they pass by a girl in a plaid skirt kicked at a pigeon.  The pigeon trotted away.   “What’s wrong with you?”  “Gross!”  other girls said.  The girl who kicked at the pigeon didn’t say anything. They walked on, talking as ordinary teenage girls did.  Nothing noteworthy happened.  Just another day in their teenage life.

It was a five second clip too familiar for me not to pick up from the cutting room floor.   It was the nonchalant way the girl kicked at the pigeon that caught my attention.

I was the girl who kicked at pigeons.

When I saw a yellow fluffy dandelion flower on the sidewalk, I stepped on it to squash with the heel of black pumps.  My friend said, “What’s wrong with you?”

I tell you what’s wrong.  That’s how the girl is treated in her family.  That’s how she has learned to treat herself.  It’s so natural that she doesn’t even think something is wrong with the way she reacts to the sight of pigeon, a vulnerable and unimportant creature just doing what pigeons do.  Nobody cares.

The sight of innocent and vulnerable creatures like pigeons and dandelions exposed and defenseless made me feel uneasy.  It’s dangerous to be innocent and vulnerable in the open without fangs and claws to fight back.  I can’t tolerate the prospect of the pigeon-dandelion being attacked, being kicked, being squashed.   So I will be the one who kicks and squashes, so that I don’t have to feel my vulnerability.

I hope the girl who kicked at a pigeon will learn what is wrong is the way she has been treated.

And dandelions are not vulnerable. 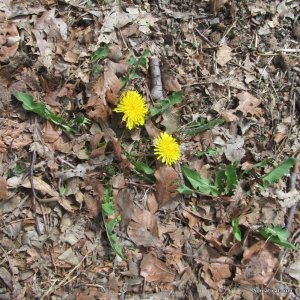 An old woman on a desolate beach was standing, staring toward the sea. The sea wind was blowing through her long gray hair. The time was neither night nor day, neither dusk nor dawn. The sea was calm. A blue-gray shadow of distant land was floating beyond the sea.

She came a long way. It was so long that it could not be just one lifetime. She walked through a couple of lives to finally come here to the distant sea. I am tired. I am so tired and I want to die. The wind is blowing through my hair, which once was so angry that it flamed up and burnt the sky.

Blazing visceral anger burnt my entrails like a ungutted fish in a fire. It charred me inside out. Now my heart lost the heat of burning coal, and left me with ash gray hair. Every step I made was on a pass of tiles and gravel. Every breath I took was studded with broken glass.

Where did I come from, I do not remember. It was so long time ago.

All the way here, I slashed, stubbed, and sliced, gushing blood sprayed all over me, on my face, on my neck and on my arms. It burnt my skin and turned it into rusted iron. I hid in dark places days and nights, wounded, without moving as enemies’ shadow passed by. I was always on a watch, alert all the time. And when I slept, I dreamed of blood and dismemberment, and woke up to the smell of burning flesh.

That’s the only way I knew. It was my way. In my hand, I see a sword darkened with dry blood.

And I found myself standing on this beach alone. No more dead bodies for me to make around here. Where is my fire? Where is my anger? It’s all gone, because there is no enemy left to kill.

What did I do to deserve these lives of perpetual fighting. I’ve survived, and nobody to kill anymore. And I am standing here alone. I am tired and I want to die. I want to end this for good. No more fighting, no more bloodshed, no more hiding. I want to dissolve into a total oblivion. No more memories. No more me.

Then what is holding me here on this silent beach? Waves come and go, come and go for thousands nights and days. Let me dissolve into the place where the sea and the sky are indistinguishable. That is the only way I can stop fighting. Please do not make me turn into an Oni (demon) again.

END_OF_DOCUMENT_TOKEN_TO_BE_REPLACED

In the time of feudal warlords, one warlord stroke a deal with 48 demons.   In exchange with his first-born child, the demons agreed to help him to concur the country.  When he came back to his castle from the campaign, his wife gave birth to a son.  The baby was born with no eyes, no limbs, no vocal cords, no ears, no nose.   The warlord ordered his wife to get rid of the creature.  The wife put him in a cradle and let the river take care of it.

A medicine man living in the woods walked by the river and found a baby crying without voice.  He took a pity on the poor creature and brought him home. The baby survived and grew up to be a boy.   The medicine man made artificial limbs and false eyes for the boy.  The child could see with his mind’s eyes, and could hear and talk without hearing and talking.  The child grew up to be a young man.  The young man was excelled in the way of sword.   The medicine man created special prosthetics for him. The artificial limbs were loaded with swords and other weapons.

When the medicine man passed away, a spirit came to the young man and told him that he was destined to go and find 48 demons.   “For each demon you kill, you would reclaim the body part the demon took away,” the Spirit said.

The young man became a vagabond to follow his destiny.   He encountered a demon in a village.  It was torturing the villagers.  He fought the demon for the villagers to be liberated.  When the young man killed the demon, he regained one of his body parts back…with agonizing pain.   Seeing the young man growing a new body part, the villagers deemed him as one of the demons and cast him out.  So it goes on.  He had to keep on wandering till he became whole.  People started to call him Hyakkimaru, a Boy with One Hundred Demons.

I loved this story when I was a kid.  It is a manga/anime by Osamu Tezuka.   If you are interested in the original story, check Dororo and Hyakkimaru.  The plot summary above is from my memory and may contain some interpretation.

It is one of the Hero’s Journey stories a la Joseph Campbell.

END_OF_DOCUMENT_TOKEN_TO_BE_REPLACED

“Yeah, my dad was a werewolf and my mom was a python and we spent Saturdays performing musicals based on the writings of Pol Pot, but I’d like the chance to coach my kid’s Little League team.”

This sentence cracked me up in 2005.  It was well before Twilight Saga.  It was the year of Batman Begins; Harry Potter and the Goblet of Fire; The Chronicles of Narnia.  The writer, Amy Sohn, was way ahead the curve.   The article is about dating and child-bearing.  You can read the entire article here:  http://nymag.com/nymetro/nightlife/sex/columns/mating/14917/

Since Twilight, the parentage of werewolf and vampire coupling seems to be common and perceived rather romantic than damaging.  It was the Mother Python that got me, though.

Yeah, my dad was a werewolf and my mom was a python.

If your father was a werewolf and your mother was a python and you were brought up by them, you have to remember that you could be a werewolf and/or a python. We might pass for a human if we are careful, but we have to be always aware of the possibility of turning.

What is the most difficult part of having a werewolf father was the turning part.  He was not Mr.Rogers, but appeared to be an ordinary guy during the day when with villagers.  And he turned suddenly without warning.  What we could do was to hold our breath and remain hidden till he turned back.

What is the most difficult part of having a python mother was her lethal hug.  She force-fed her children because she was always hungry for love and In the name of love, she squeezed her children’s will out till we stop moving.

So the children learned to survive.  I followed the path to be a werewolf.  When my dad turned, I turned.  Before he would turn, I turned.   At the slightest sign of threat, imagined or real, I turned.  My mom used to tell me that I was exactly my father’s child.  She covertly encouraged me to turn because I was the one with fangs and claws, while she claimed my younger brother as her own.  After I left the nest, I realized I turned to python when I was not a werewolf.  Python part was more difficult to control.

It took me decades of therapy and deep psychology work to unlearn the old way, to learn the world is not dangerous, and to relax because the person you have a relationship with won’t suddenly turn and attack you.  Being human is a never-ending process for us, the children of werewolves and pythons.  I know I can go back to the old way at any moment and most of the time I manage to choose not to.  I’m still learning how to be human.

I don’t blame my parents for being a werewolf and a python.  That’s how they were and they did their best.  I am responsible for whom I chose to be.  As Sarah Conner in T2 realized, even a machine can learn to care.