Occasionally I see people pulling a utility wagon with a large dog on it in a park.   It is a lovely sight.  It shows how much the human loves the dog.  Walking is our most important time together.  Many of us become very attuned to our dog.  We are like two energy body tethered to each other and eventually become one.  When a large dog loses mobility due to age, some of us would do anything to make up for it.

However, I rarely see the same wagon with a dog again.  I had been wondering what happened to the wagon.

My 80+lb dog started to refuse walking more than a block.  He wanted to go out and walked several yards to finish his business.  Then he turned around and went home.  Sometime I could entice him to walk around the block, but not to the dog park he used to love to go.  The weather was great and I wanted him to spend some time in the dog park, where he was loved by senior humans.  I thought for a while and decided to buy a utility wagon.

Then my dog suddenly collapsed in my apartment.  He defecated unusual amount of poop.  He lost control of his lower body and rolled on his feces.  I didn’t think any taxi would take a poop covered dog, so I put him on the wagon and pulled him to the ER for 20 some blocks.  On the way to the ER, I promised him I wouldn’t let him suffer.

Long story short, I took him home and spent a night with him.  The next day I took him for his last wagon ride.  It broke my heart but I knew it when I ordered the wagon.

He didn’t suffer and he passed in my arm.

With my last dog and cat, I let them suffer because I couldn’t let them go in time.  Not this time.  It was the gift only I could give him.

Then I realized that it was how I wished I would go.   Unfortunately being human, only I can give the gift to myself.

For a couple of hours, I didn’t exist. I was under anesthesia during breast biopsy surgery.  I was wheeled into an operating room and started counting.  Then I was no more.  No dream, no memory, no me.  Slowly I came back into being.   It was the most peaceful waking up I ever had.  I smiled.  If death is like this, it’s a blessing.  No dream, no memory, no me, total oblivion, that’s what I yearned for.  I looked for the peacefulness I experienced during the surgery.  I found Ambien provided the similar effect.  When I didn’t take the pill my nightmarish dreamscape came back with vengeance.  Eventually the nightmare started to seep in to my peaceful Ambien coma.  I stopped taking it.

Death was my parasite twin.  He was always with me so long as I remember.   I don’t know if a 5-year-old can have a concept of death. Nevertheless I remember myself telling my aunt that I was considering to “leave” but decided not to because if I left I wouldn’t be able to have my favorite cake anymore.

I’ve never been suicidal.  I was pretty careful about self-preservation.  Still there never was a day I didn’t think of death.  Suicide ideation, DSM V would say.  There is a code for that.  But where did it come from?  I wasn’t depressed when I was 5.

When my father was about my age now, he started have a cough.  His X-ray image showed a legion in the lung and he had a surgery.  Everybody including the doctors were sure that it was lung cancer.  My mom called me to come home to see him.  Everybody thought he was going to die soon.  After surgery, they found it was benign.  Still he had a lobe of left lung removed.   After he recovered, he showed me the long scar proudly multiple times.  We were not close but I visited him at the hospital.  My mother left for some errand and I was alone with him.  He suddenly said, “I thought I was a goner this time,” and he cried.  I didn’t say anything.   Neither of us were used to show vulnerability and neither of us knew how to deal with it.  That day I realized my father was afraid of death.  “So you are afraid of death and your daughter wants to die, Ha,” I thought.  It’s a joke, isn’t it?

He passed away at the ripe age of 86.  I started to understand where his fear came from.  My father was diagnosed to be diabetic when I was about 4 and my mother was pregnant with my brother.  It was early 1960s and a diabetic was not expected to live a long life.  After my father passed, I heard the family history from my aunt.  He lost his father, my grandfather, when he was very young.  My grandfather was diagnosed with diabetic when it was a death sentence.  He quitted his job as a police officer and stayed home doing nothing and lived another 7 years.  My father only knew his father as a sick man waiting to die.  Soon after, his older sister was diagnosed as diabetic.  She was married and had a kid.  When she became ill she came back to stay with her mother, my grandmother.  She soon died from complication when the kid was still young.   My father took care of his young nephew for a while as his little brother.

Now my father found himself diabetic.  He had a 4-year-old daughter and his wife was pregnant.  No wonder he was afraid of dying.  For the first time, I felt sorry for him.  I grew up watching him have an insulin injection every morning.  With every syringe he must have been fending off death.

I still occasionally have suicide ideation when I’m depressed.  But most of time I just enjoy my life.  Every day is a beautiful day to live.

Recommended Reading if you are interested in this kind of stuff.
It Didn’t Start with You: How Inherited Family Trauma Shapes Who We Are and How to End the Cycle
by Mark Wolynn
Link: http://a.co/1lVnzy4 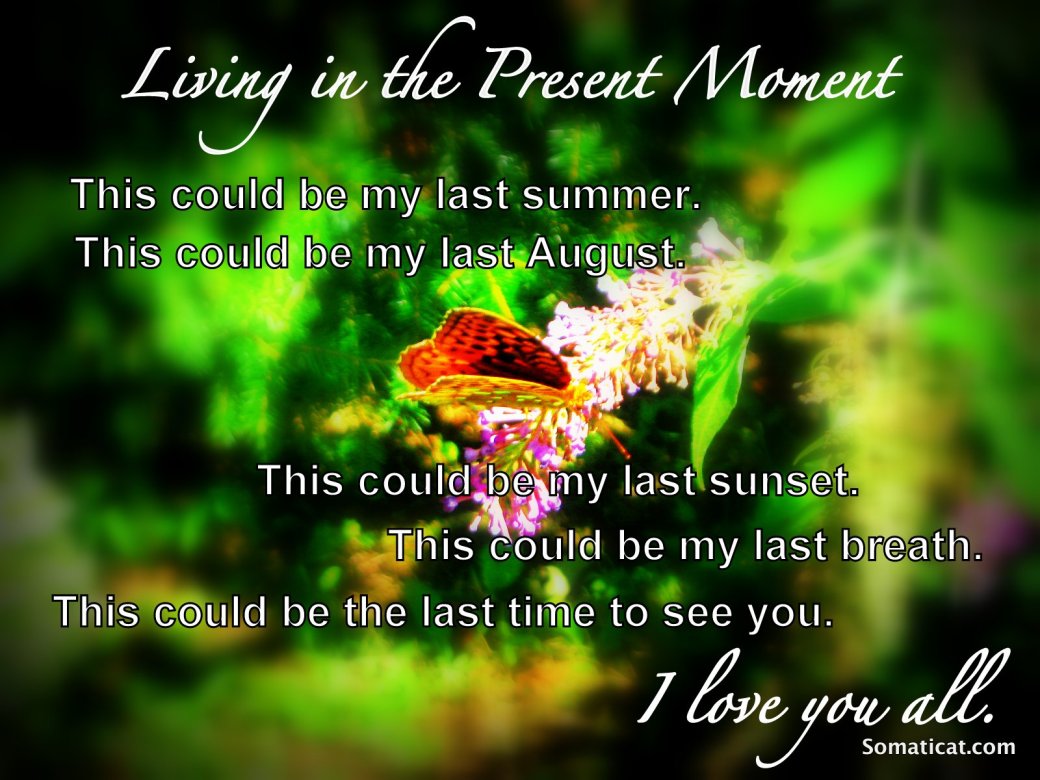 One’s Journey often starts before one knows it. My friend, Maria, became aware of weakness in her abdominal muscles in the summer of 2010. She didn’t know it was going to be her last summer. She was diagnosed with ALS, aka Lou Gehrig’s disease, in December 2010. Every summer, I think about how she lived the last year of her life and contemplate on the meaning of living in the present moment.

Join me, if you would like, to be fully present in this moment of our life, in this summer, in this August, on this day, at this time of the day… It only takes a moment. And Breathe for my friend. Thank you… I love you all.

My 90 yrs old aunt in my old country lives by herself.   My Auntie does not call me because she is not sure how to call U.S.  I usually call her every other week to check on her.  Every time I call she tells me she will kick the bucket soon as she has been telling me for the last 15 years or so.  She is a tough old woman.

My home town is one of the dying towns.  The young left home for larger cities, while the old are slowly dying out.

“Most of the neighbors are gone,” Auntie said.  “After Ms. Ono passed, the house is unoccupied.  The Oharas are gone too.   Mine is the only house lit at night.  It’s like a small boat in the middle of ocean at night.   Even your Mom’s house is dark.”

Ma lives nearby.  They watch over each other.   “She hasn’t turned on the light yet.  Go check on your Auntie.  She might be dead,” Ma says to me when I’m around.  “The light is out.  Your mom must be in bed already,” Auntie says when I am with her.  My Ma has been in hospital for about two months and her house has been dark.

It’s what we all are afraid of, isn’t it?

The ocean must be full of those lonely boats…  I would rather be a falling tree in the woods in silence because nobody is there to hear it fall.